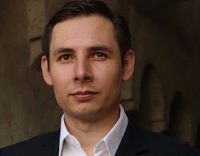 Daniel Simandl studied French horn at the State Conservatory before graduating at the Academy of Performing Arts in Bratislava at the Department of Orchestral conducting. His teachers were renowned conductors Ondrej Lenárd and Peter Feranec. Afterwards he continued his studies with Jiří Bělohlávek in Prague and additionally graduated from the Summer Academy at Mozarteum University in Salzburg under the supervision of German conductor Bruno Weil.

As a guest conductor at the Opera of Slovak National Theatre in Bratislava, he was conducting several ballet performances as Dubovský´s Mystery Key and Minkus´ Bajadera. Among other cooperations we can find the Orchestra of the Slovak Radio, the State Philharmonic Orchestra Košice, the State Chamber Orchestra Žilina, the Metropolitan Orchestra Bratislava, the Orchestra Camerata Novisoliensis and Il Cuore Barocco. Daniel Simandl is currently the conductor of the Opera studio of the State Conservatory in Bratislava. As a conductor and assistant conductor he worked at the opera festival in Gars am Kamp in Austria, assisted in the Opera of the Janáček's Theatre in Brno and in the Prague National Theatre.

From 2012 until 2017 Daniel Simandl has been cooperating with the renowned Viennese Arnold Schoenberg Chor. Together with the State Chamber Orchestra Žilina and the Children's Opera Harmónia he performed Mozart's Magic Flute, Donizetti's Elixir of Love and Don Pasqual, Smetana's Stolen Bride for younger audience and Ryba's"Czech Christmas Mass". In 2016, he introduced the F. Lehár's operetta Count from Luxembourg at the Nová Scéna Theatre in Bratislava.

Daniel Simandl is the choirmaster and the founder of the singer ensemble Danubius Octet Singers, with whom he made a profile CD "A Cappella Pur" of the Slavic male choir production (2014), a DVD recording to mark the 200th anniversary of the birth of Ľudovít Štúr (2015) and the CD "Slovenská pieseň - Slovak song" (2017). He was conducting the ensemble on the Mitte Europa 2014 (Germany, Czech Republic), Janáčkovy Hukvaldy 2014 (Czech Republic), Musica Sacra 2014 (Nitra), Nitra Musical Autumn 2015, Budapest (2015), Vienna (2016), 20th International festival of the choirs in Pécs (2016), International festival of chamber music Konvergencie 2017 (Bratislava) and at Smetana's Litomyšl (2018). In 2017 he introduced the Slovak premiere of G. Donizetti's opera "Rita" at the Chamber Opera in Bratislava and also has become the conductor of the Prague Children's Opera. He conducted the"Serge Gainsbourg: Le Symphonique" in Bratislava with the well-known English actress and singer Jane Birkin in 2018. Since 2018 is Daniel Simandl an assistant of choirmaster in The Czech Philharmonic Choir Brno.